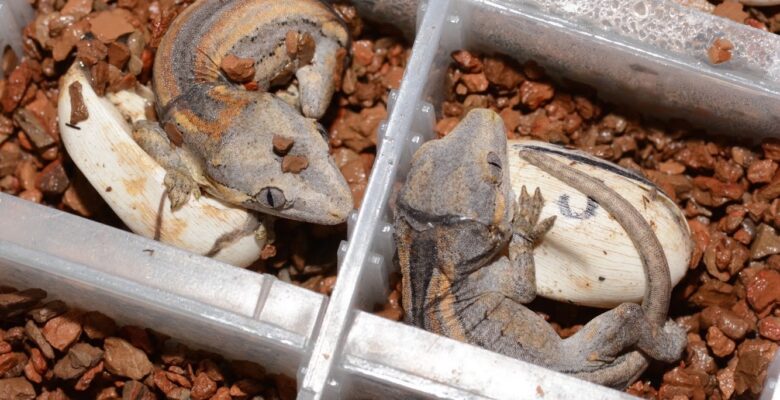 Capstone Title: An Overview of Reproduction and Development in Rhacodactylus auriculatus

The gargoyle gecko (Rhacodactylus auriculatus) is a large frugivorous lizard from the pacific island of New Caledonia. Historically the New Caledonian ecosystems and their fauna have received little attention by researchers or the public, but recently New Caledonia has been rediscovered as a hotspot for biodiversity and micro-endemism. Despite increasing attention to New Caledonian fauna, the life history and biology of the Giant Gecko species has remained a mystery.

Now I present for the first time an introduction to the reproduction and development of the gargoyle gecko (Rhacodactylus auriculatus), including: (1) breeding behavior, (2) oviposition and eggshell morphology, (3) embryonic development and incubation, and (4) early growth and development. For this research project I reared 11 adult gargoyle geckos under the same conditions to control for confounding factors and simulated the New Caledonian climate to induce natural reproductive behavior. Geckos were introduced as pairs and then either isolated or kept together. I collected data for individual body condition (body mass, snout to vent length, and BMI), clutch information (lay date, relative egg mass, clutch order, fertility rate, incubation length and temperature), offspring information (sex, growth rate, body condition). I performed statistical analysis with linear regression, ANOVA, and ACOVA to determine any significant interactions between the explanatory variables and reproduction/development, the best-fitted models were retained.

Reproduction in Rhacodactylus auriculatus occurs throughout the winter and spring and takes a significant toll on the body condition of the breeding adults; this is followed by a recovery period in the summer through fall during which geckos prioritize bulking up for the next breeding season. Successful reproduction corresponds with periods of increased parental energetic investment, with fertility rates dropping as geckos enter their recovery period. This observation coupled with a decline in the relative mass and fertility of subsequent clutches throughout a breeding season suggests that seasonal reproductive success is limited by energetic reserves in R. auriculatus. Furthermore, following copulation females are able to retain sperm to fertilize up to three viable clutches of offspring which allows for delayed reproduction, increased dispersal, and sperm competition. The gargoyle gecko is a multi-clutching (6.5 clutches per year) species that deposits eggs between the spring in summer in clutches of two eggs. The eggshells are semi-calcareous with a 65% mineral content, this is a novel eggshell strategy compared to the rigid-shelled and flexible-shelled eggshells laid by other gecko species, this intermediate level of mineralization is resistant to desiccation and is possibly an adaptation that has allowed them to utilize arboreal nesting sites. Typical of ectothermic species, the incubation length is a function of temperature and generally lasts from 49 to 114+ days. Offspring emerge weighing 2.6 grams and measuring 39 millimeters in snout to vent length, with hatchling body condition increasing with relative egg mass and maternal body condition. No clear trends were seen with regard to the mode of sexual determination, but it was noted that sex ratios among offspring varied by the maternal identity, perhaps sexual determination in Rhacodactylus auriculatus is a result of genotypic x environmental interaction. I also report the first case of facultative parthenogenesis in Diplodactylidae species with a viable offspring developing from the egg of a virgin Rhacodactylus auriculatus, further research is needed to determine the mechanism involved but terminal fusion automixis is suspected. Initial growth rate in hatchling gargoyle geckos is variable and determined in part by maternal environment and embryonic conditions.

Lee, Y., Kim, N., and Choi, S. 2018. A comparative study of eggshells of Gekkota with morphological, chemical compositional and crystallographic approaches and its evolutionary implications. PLoS ONE. 13(6):e0199496.

I added the following to Wikipedia in an attempt to improve public access to scientifically-literate information about reptiles: