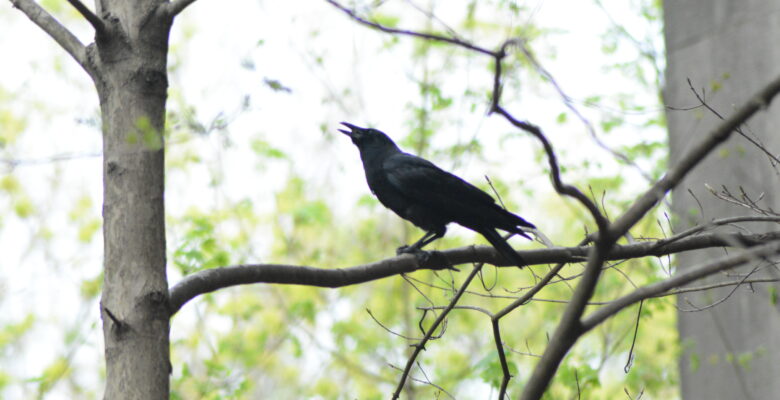 Summary: As part of her doctoral research at the University of Washington, Dr. Kaeli Swift has been studying how crows behave in response to their dead, she summarized this research on an episode of the podcast of Ologies with Alie Ward, titled “Corvid Thanatology (CROW FUNERALS)”. The field-based research entailed Dr. Swift traveling to Seattle parks and watching crows to get an understanding for their baseline behavior; how pairs interact, territorial disputes, communal roosting, seasonal behavioral changes, predator response, and interactions with new animals. This step of acquiring basic understanding was important for being able to distinguish normal behaviors from those that were unique to mourning, the second step was to then measure how crows respond to a taxidermy crow that was placed in the park. To control for behavior in response to a dead crow she also measured their response to taxidermy specimens of other species. The response to the dead crow experiments were obvious and repeatable (with over 100 trials), the crows would let out a very long and eerie warning call upon spotting a dead conspecific, this loud sound would attract dozens of other crows who would join into the song themselves for 15 to 20 minutes. The crows would fly down to the dead specimen and interact with it by performing an examination, which Dr. Swift explained is behavior that is similar to an autopsy, meaning that the crows were trying to determine the cause of death and assess the risk of danger to themselves. In fact, the crows quickly associated the researcher who placed the taxidermy down as a threat and would mob or attack the person. This anti-predator response was so strong that the crows actually could recognize the individual and would mob them if spotted in the future. Their ability to recognize individual human faces necessitated the use of masks for the researchers so that they could disguise their true identity from the crows. The most surprising finding from the observational research was that sometimes crows would respond to the dead crow by engaging in reproductive behaviors; either by attempting to copulate with the dead crow, soliciting copulation from their mate, or by engaging in a “three-way” with dead crow and their mate. Dr. Swift hypothesized that this mating response is initiated in response to perceived danger and serves two functions: first they might be mating due to a perceived fear of being killed before they have the chance to reproduce, and second this might be a social behavior that they use for emotional regulation. The final step of the research involved a laboratory component, where Dr. Swift exposed live crows undergoing FDG-PET scans to a dead crow specimen (novel fear), a dead hawk (innate fear), and a human researcher (learned fear) and then used brain glucose concentration as a proxy to measure neural activity. She found that each stimulus activated a different region of the crow’s brain, but that the dead crow activated the hippocampus.

Response: I found this research talk extremely interesting because it relates to material about social behavior and theory of mind that we have been discussing in my behavioral ecology class with Dr. Schaeff, where we have focused on identifying the evolutionary significance of animal behavior, because in order to be an evolutionary stable strategy the behavior needs to confer a survival or reproductive advantage. In the case of crow mourning behavior the research results support the hypothesis that the mourning behavior is an evolutionary adaptation to identifying and neutralizing threats which has the benefit of increasing the crow’s survival odds, because if they can learn from the death of their conspecifics then it is possible for them to modify their own behavior to reduce the risk of dying in the same manner. Additionally, the ability for crows to not only recognize the faces of the human researchers, but to communicate this to other crows fascinates me because it shows that they have a highly developed social brain, and the ability to distinguish individuals is important for theory of mind (differentiating between the motivations of self and the motivations of others) and could provide additional survival benefits. Secondly, the strange copulating behaviors that were sometimes observed in response to the dead crows may provide a reproductive advantage if they are using death as a cue to measure environmental risk and the urgency of reproduction. I think that these discoveries are very important for the fields of ornithology and behavioral ecology because it shows that crows have a much more complicated social ecology than has previously been believed. This is also groundbreaking for neuroscience because crow brains are radically different than that of primates yet are capable of many of the same abilities, which disputes theories that homology in physiology is required for homology in function. Finally, I think that future experiments should focus on how crows and their brains respond to an unfamiliar dead crow versus a dead relative, because I am interested in seeing if there is an emotional social response.