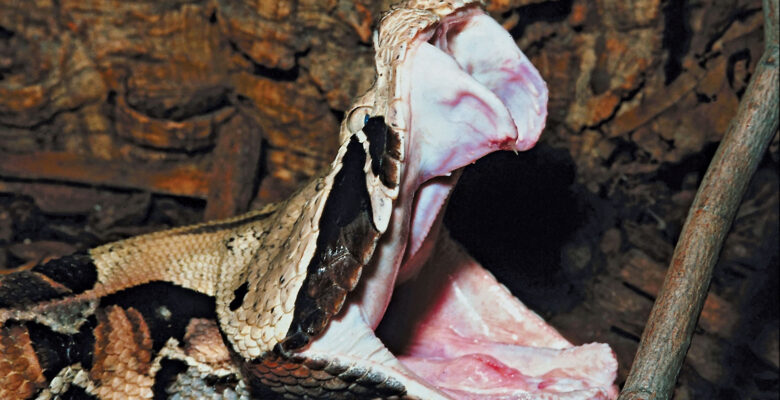 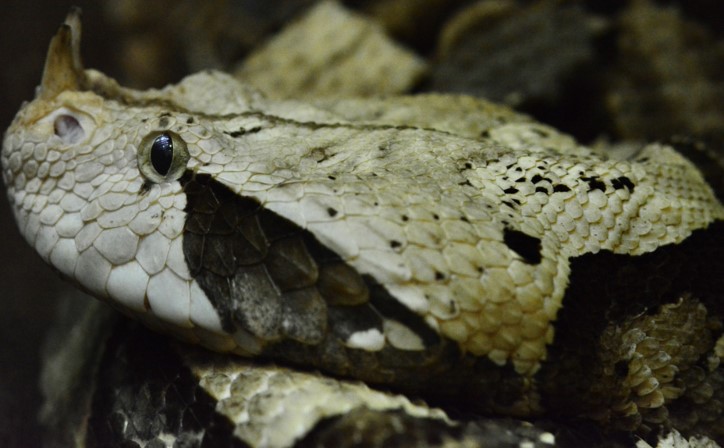 Gaboon vipers are very large vipers reaching 3.9 to 7.2 feet (1.2 to 2.2 m) in length as adults and weighing up to 22 pounds (10 kg). Their coloration is cryptic and allows them to camouflage in leaf litter.

This species envenomates their prey with 2-inch long (5 cm) fangs. Their venom contains hemotoxins and neurotoxins.

Gaboon vipers are solitary and only come together for mating purposes. They can communicate through chemical signals, visual signals, and by detecting and emitting vibrations. If provoked they will produce a loud hissing sound or will bite the offender delivering a deadly dose of venom, however, this is a relatively docile species that rarely bite people. They are nocturnal animals that become active after the sunsets.

Gaboon vipers are found in low-altitude rainforest and tropical forests throughout central and western Africa.

They are a terrestrial species that hide amongst leaf litter. 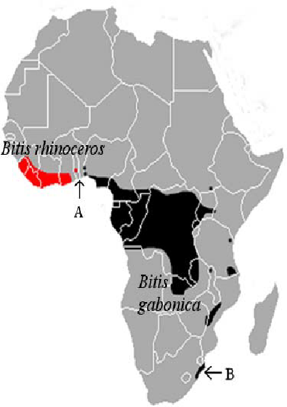 Gaboon vipers are ambush predators; they lie in wait amongst leaf litter and wait for prey to pass by. They kill their prey through envenomation. Most of their diet consists of small mammals, ground-dwelling birds, and amphibians. There are reports of them eating larger prey, including giant rats, brush-tailed porcupines, and royal antelopes.

Gaboon vipers do well on a pre-killed or frozen/thawed rodent-based diet, with occasional supplements of chicken or quail.

Gaboon vipers mate every two to three years between the months of September and December, which is the rainy season in Africa. Gaboon vipers do not lay eggs, instead, they are viviparous. After a seven-month gestation period, the female gives birth to 20 to 50 offspring. Hatchlings are 9 to 14 inches (22.9 to 35.6 cm) in length, they are fully independent and do not require any parental care.

Many of the gaboon vipers in the reptile-hobby have been taken from the wild or farm-raised. The process of importing this species can be very dangerous for the animals and many of them die in transit to European and North American markets. Other threats include deforestation and forest degradation.

In captivity, gaboon vipers have been recorded living up to 18 years. 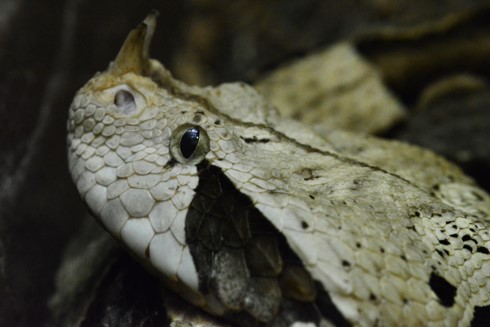 Substrate and Decor: They can be housed on cypress bedding, a soil mixture, aspen shavings, newspaper, or paper towels. A hide box, wood, and leaf litter should be offered.

Lighting: These animals are nocturnal so they do not require UVB lighting, however, some sort of daytime lighting should be used to keep their “internal clocks” in order.

Humidity and Water: Humidity should be between 75% to 85%, installing ventilation fans on the enclosure helps to prevent respiratory infections. Many gaboon vipers are wild-caught and refuse to drink from still water, sometimes they must be offered moving water, or they can die from dehydration.