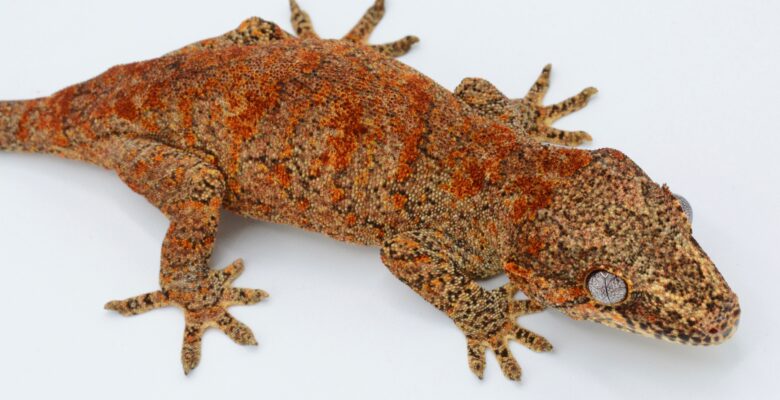 About: Pullulan (Ganxa19006) is a female orange blotched retic with a light yellowish-orange base. She was missing a toe tip when I purchased her, “Missing one toe tip on left manual digit II from a retained shed when little.  Fully healed and won't affect overall mobility.  Hasn't had shed issues since healing up, but it's a good idea to still check for retained shed periodically”.

Her mother "Xantham (Gamta12003)" is an orange blotched retic with a yellow base, she was produced by Gargoyle Queen out of an "Amun" x "Taweret" pairing and hatched on November 14, 2012. Pullulan's maternal grandmother "Taweret" is a melanistic red stripe from Gecko Holic Reptile's Troeger Line, she hatched in 2008. Pullulan's maternal grandfather "Amun" is funky orange/red stripe with a yellowish-brown base, he originates from Repashy lines and hatched sometime before 2005.

Her father "Anubis (An (LB#5))" is a red and orange skeleton blotch with a pinkish-red base, he was produced by Greysky Exotics out of a Boris x Lola pairing, his hatch date is July 25, 2015. The paternal grandmother "Lola (LB, LV,LF)" formerly known as "Kraid" is a reddish-orange banded retic previously owned by ROC Geckos and produced by Kevin Cantrell at Passport Herpetoculture. Lola's mother "Geisha (auriculatus_f01)" is a red-based banded gecko that hatched on July 1, 2006. Lola's father is "Tex (auriculatus_m02)". The paternal grandfather "Boris (AB, LB, VB, PB, TB)" is a red-stripe produced by Hector at Northern Virginia Gecko.