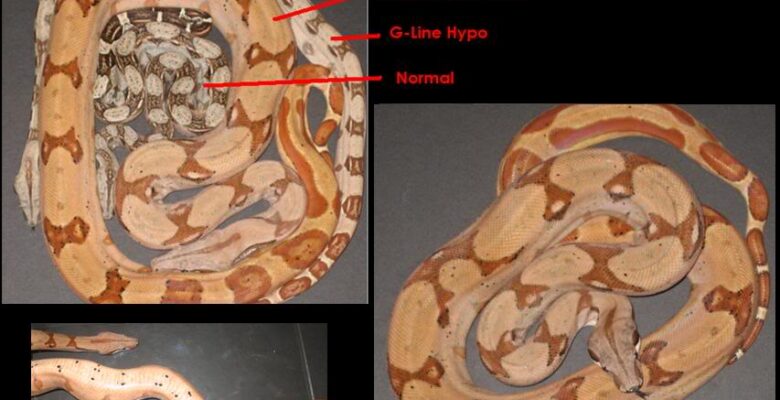 The Hypomelanistic mutation causes a drastic reduction in black pigmentation resulting from dysfunctional melanophores. This mutation is incomplete dominant and can be found in both Central and South American boas. The homologous form of the mutation is expressed when the boa has two homologous alleles of the mutated gene, this is referred to as the “super” form. The super form has reduced pattern and has very little black pigmentation. When the animal is heterozygous meaning it carries one mutated allele and one normal allele then a completely different phenotype is expressed. The heterozygote will express proteins for each allele and can be considered an intermediate phenotype between wild and “super hypo”. Heterozygous hypos usually maintain the typical wildtype patterns and have some black flecking throughout their bodies.

There are several hypomelanistic mutations. The first originating from a cross between a wild hypomelanistic Panama boa and a Colombian boa. This cross produces seven light orange boas that were purchased by Richard Ihle. They were selectively bred to create the Salmon line which has more reds and browns than a wild type. 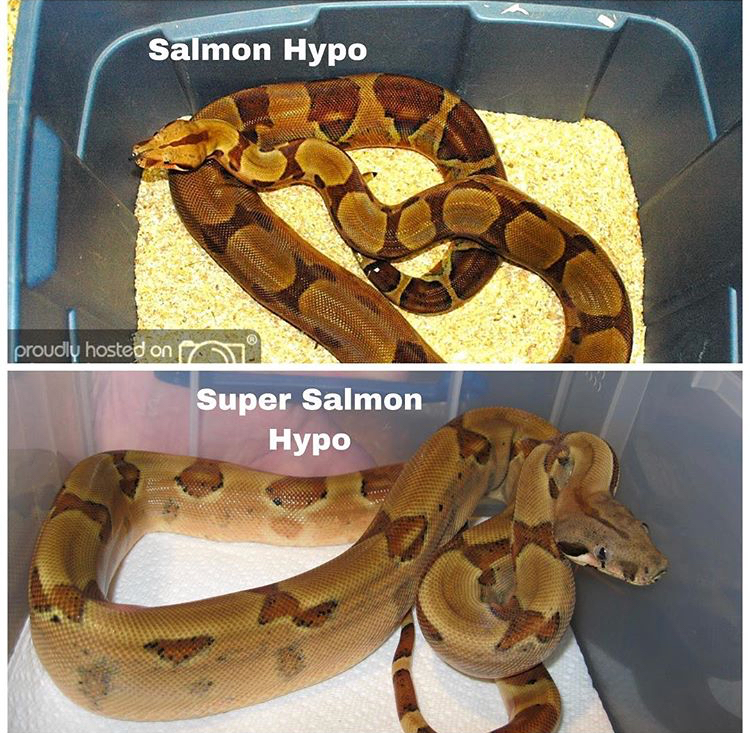 The second originates from Panama boas and was started by Jeff Gee. He named this trait Orange Tail Hypomelanistic, it is distinguished from the salmon line due to the increased oranges and their slightly elongated heads. Mainland Panama hypomelanistic boas typically have slightly shorter heads and smaller eyes. These two lines of hypomelanistic boas are compatible and thus most boas on the market are a mix of the two. 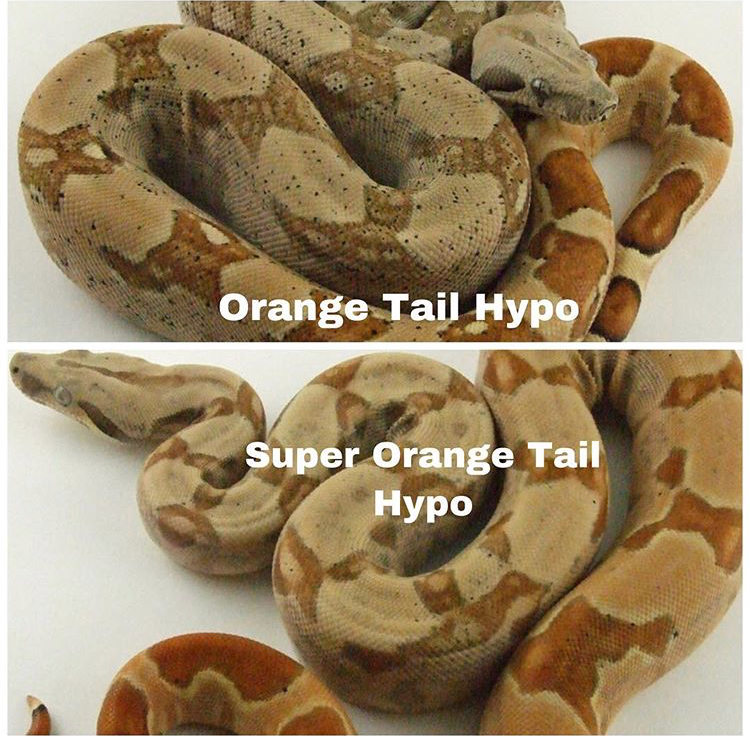 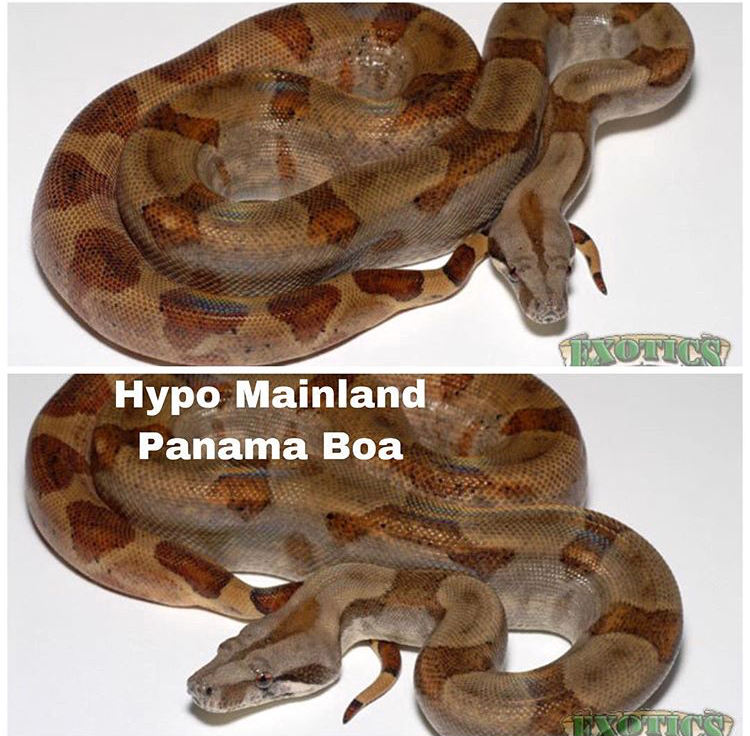 Other forms of hypomelanism have occurred spontaneously in other Boa constrictor imperator localities. In Nicaraguan boas the hypomelanistic mutation results in intense red/orange body and tail coloration with random black flecking. The saddles are typically a deep red brown outlined in a dark brown. The blotches at the tip of the tail are typically outlined in black. 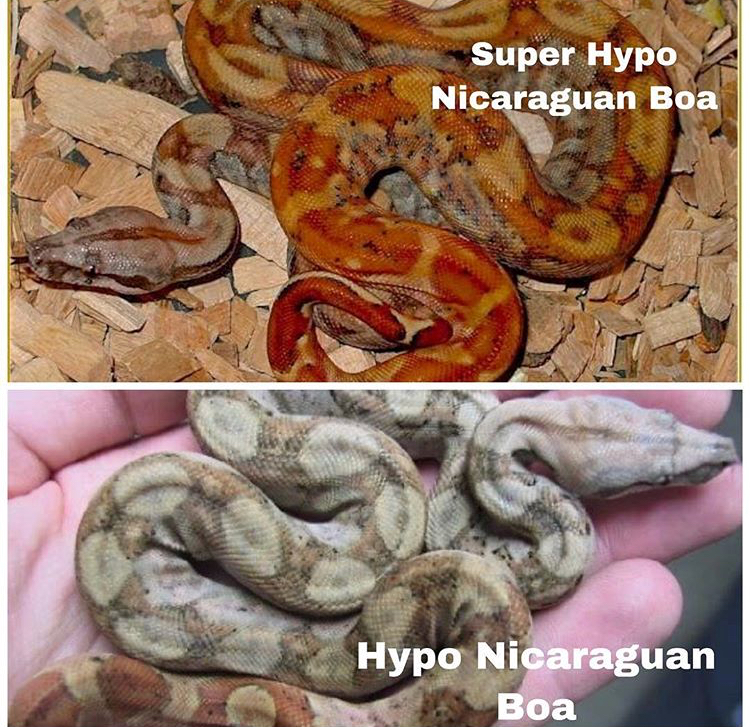 In Sonora Desert boas the hypomelanistic mutation results in a blonde/orange body coloration and a rust-colored tail. They have very little black on their bodies, mostly limited to the tips of their tail. Interestingly, their saddle count is also greater than normal Sonora Desert boas and they have orange or red eyes. 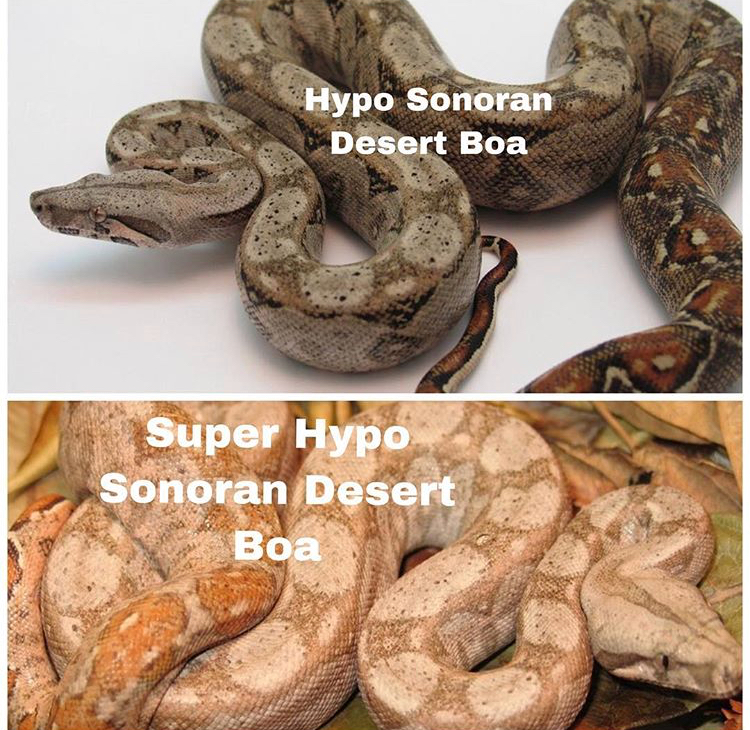 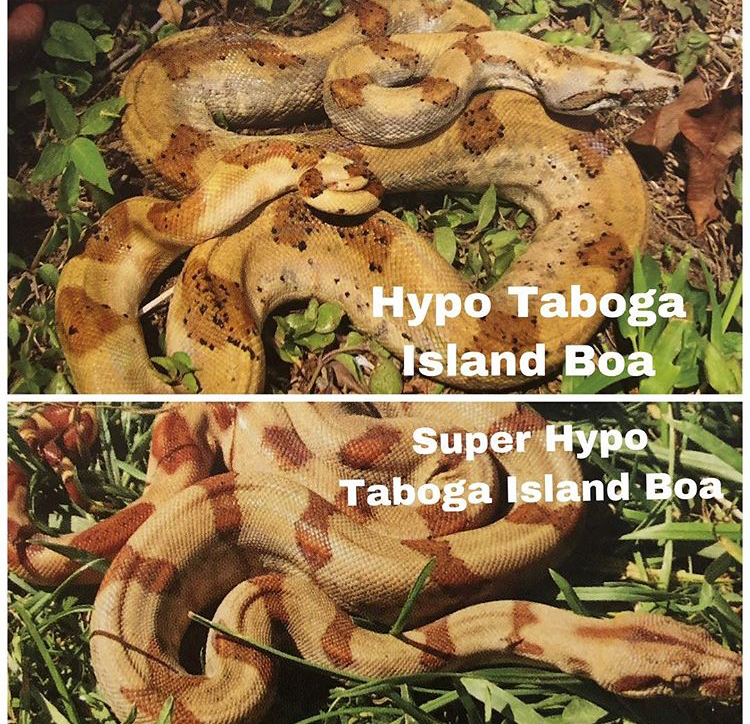 The increased reds and oranges observed in hypomelanistic boa constrictors result from the anatomy of the chromatophores residing in their dermis and epidermis. Melanophores (black pigmentation) are located above the color-containing pigment cells such as xanthophores (yellow pigments), erythrophores (red pigments), and leucophores (white pigments). When melanophores are functioning correctly little light is able to penetrate beneath the black pigmentation and is instead short-wavelength light is reflected. However, when melanophores are dysfunctional and melanin is not synthesized then light is able to reach the colored pigment cells and long-wavelength light is reflected. Central American boa constrictors have more erythrophores than their South American counterparts which correspond with their red/orange appearance.

Pastel is a line bred trait that results in intensified colors and a further reduction of melanin pigmentation in hypomelanistic boas. It is believed to be a polygenic trait that is somewhat dominantly inherited.
East Bay Vivariums began the EBV Red Group line, it can be described as “erythristic” meaning an abundance of red, they typically have colorful saddles. 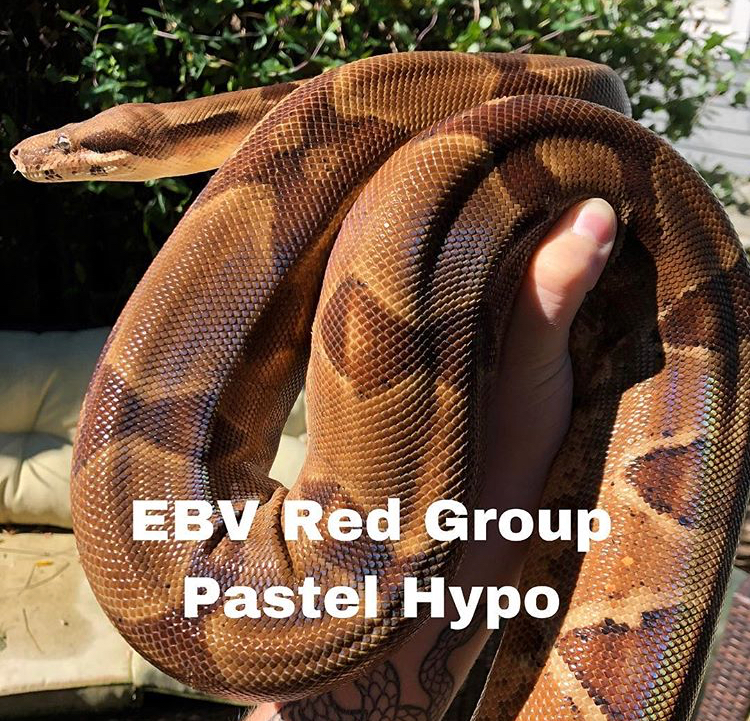 The Pastel Dream line originates from Jeff Ronne’s selective breeding of light colored Colombian hypomelanistic boas.
Now other breeders have created their own lines of pastels, some include Cherry, Inferno, Summit, Ferrari, and Flamingo. The Dutch Pastel line was created in a similar fashion by Freek Nuyt. However, these boas were crossed with a Surinam Boa constrictor constrictor, giving them even more intensified reds. 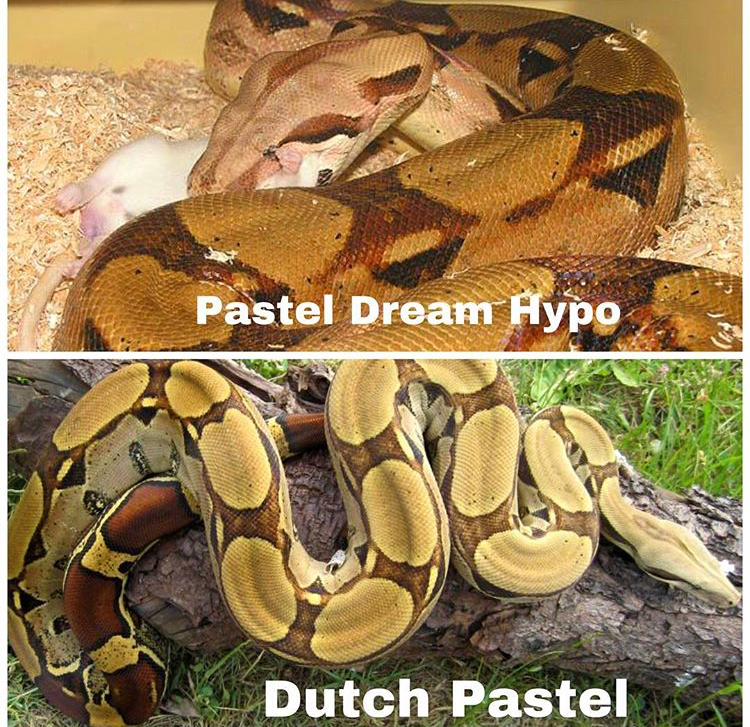