The best format for viewing this presentation is to download the following PDF file: 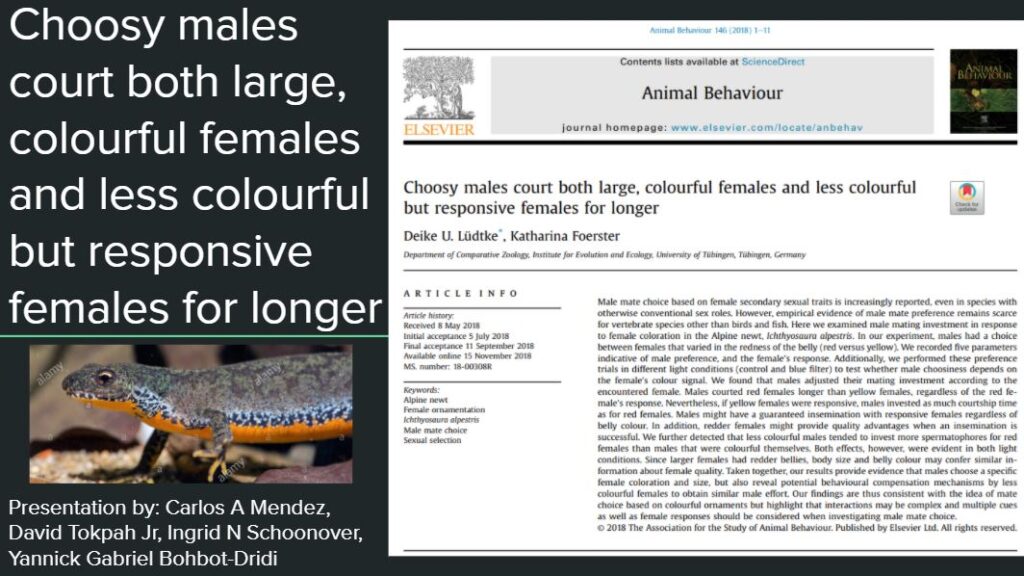 Body size and coloration as a proxy
● In a sequential choice experiment Male Australian desert gobies, Chlamydogobius eremius, spent more time courting large females when offered a choice in size (or adjusted their mating effort towards a second female according to the size of a previously encountered (Wong & Svensson, 2009).
● In sequential choice experiment males prefer females of the two-spotted goby, Gobiusculus flavescens with yellow-orange bellies during the breeding season and males prefer colourful over drab females (Amundsen & Forsgren, 2001)

Why study Alpine Newt (Ichthyosaura alpestris)?
Males have comparatively high mating costs because they have a set amount of spermatophore and sperm every mating season; thus constraints have promoted male mate choice in Alpine newt.
● Females must be fully attentive in courting conditions; If spermatophore does not only touch cloaca spermatophore is wasted so...
● There’s no reliable feedback so multiple spermatophores are deposited.
Empirical evidence of male mate preference remains scarce for vertebrate species other than birds and fish.

Predictions:
● 1) The belly colour is a secondary sexual trait of the Alpine newt indicating higher productive value
● 2) The bright reddish/orange color females will be favored via more investment
● 3) Male investment is also modulated by success of a courtship ritual which depends on the behavioural coordination between male and female

Study Animals and Housing Conditions
● Adult newts from the laboratory population at University of Tübingen were used (Population requirements: Caught between 2011-2012 and the offspring had to be between 2012-2014)
○ Males and females kept separate pre-experiment and during hibernation. Only 15 newts allowed in each 60x60x38 CM aquarium (containing 40L of water)
○ Placement of gravel resembled optimal conditions for newt’s to hide. In order to exhibit proper mating behavior, the environment had to closely replicate the wild habitat of newts
○ Newts were fed red mosquito larvae and water fleas ~ 3 times a week

Supplemental Feeding and Colour Measurements
● Half of the females randomly assigned to color enhancement treatments (other half used as control) - Enhanced coloration conducted through the use of water fleas bathed in carotenoid solution containing lutein and B-carotene.
● The reflectance of the ventral side of newts from 380-700 nm was measured on a spectroradiometer (place 45 cm away from the newt’s underside)
○ (Spectroradiometers are used to measure the surface reflectance and using the reflectance calculate the absorbance of a material in a range of wavelength)
● The goal was to measure the chroma of the newt’s ventral side (the belly) - two measurements were taken, and the average was the chroma measurement for that specific newt (Maia, Eliason, Bitton, Doucet, & Shawkey, 2013; Montgomerie, 2006).
● These measurements would aid in determining the effect of belly color from female newts on male newt mating behaviors

General Observational Procedure:
● All procedures were conducted in a little over a month (April-May) including 45 males and 47 females
○ During the main mating period of local wild Alpine Newts (von Lindeiner, 1992; Thiesmeier & Schulte, 2010; Lüdtke & Foerster, personal observation)
○ Environment was created similar to that of natural Newt habitat
● Newt’s reach sexual maturity at a certain size, with certain physical characteristics
Thiesmeier & Schulte, 2010).
○ Different than other animals, that reach sexual maturity at a certain age
○ Factors such as weight, snout size, are characteristics that indicate sexual maturity
● 5 Parameters were recorded
○ (1) Latency to courtship, (2) latency to the first spermatophore was measured (placed on the ground by the male), (3) number of spermatophores offered by a male to a female during a given 45 minute trial, (4) courtship investment measured as a proportion of time during trials where the male stayed within 5 cm from the female, (5) fanning during was measured as the proportion of time from the moment the male showed courtship investment

Light Reflectance Manipulation/Statistical Analysis
● In order to exclude other factors that may affect male attraction to female newts, light reflectance manipulation was used
○ Filter paper that limited the expression of any light from a 600-750nm wavelength which in turn, would make the bellies of female newts appear grey. Each male underwent four trials, two without the filter paper, and two more with limited light expression
● Every single parameter was tested, as well as the use of the two control filters to determine whether they had different effects on male behavior
● 130 trials conducted
○ (Ex. To analyze latency of spermatophore, only 109 trials were included in the data set where the male deposited at least one spermatophore)

Parameter One: Latency to Courtship
● The duration of time from the start of the experiment until when the male’s snout was within 5 cm of the female.
● Courting latency was similar for both female color groups.
○ Males took 6.23 ± 4.32 minutes to begin courting red-bellied females.
○ Males took 5.70 ± 3.87 minutes to begin courting yellow-bellied females.
● Female chroma or female snout to vent length could be used as equally valid explanatory variables for this model. 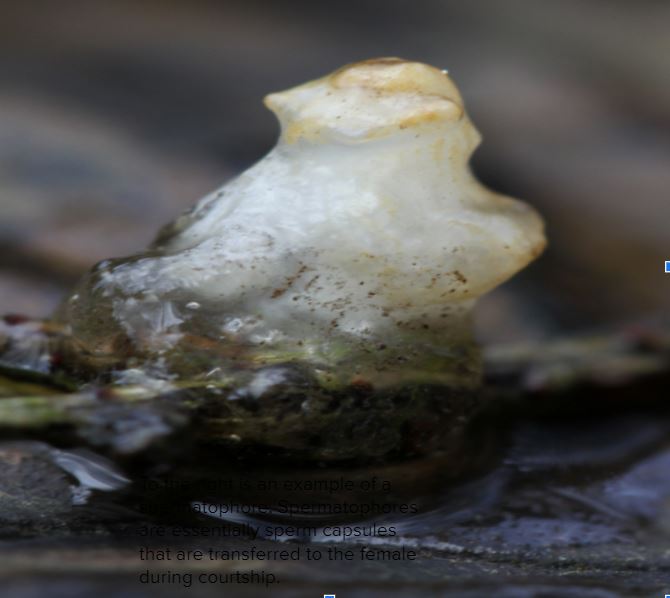 Spermatophores are essentially sperm capsules that are transferred to the female during courtship.

Parameter Five: Fanning Duration
● The proportion of time during one trial where the male fanned his tail from the time he showed investment in courting the female.
● Males invested equally long intervals fanning their tails for the red-bellied and yellow-bellied females.
● Males spent an equal amount of time fanning for smaller-bodied females as they did for larger-bodied females.

Conclusions
Based on the aforementioned findings, one can make two basic conclusions about the experimental subjects:
1. Male alpine newts modified their courtship investments in an apparent direct response to the color of the introduced female’s belly
○ `Larger portion of time invested towards courting red-bellied females
2. Males with less-colorful bellies invested more spermatophores on red-bellied females
○ Colorful males showed no difference in spermatophore contribution between the two colors of females
This evidence supports the conclusion that male alpine newts adjust both their mating and courtship behavior according to the belly coloration of a given female.

Discussion
● What are possible reasons for the male’s mating choosiness?
○ Belly color is thought to be associated with body size, and therefore quality of genes
○ By using such a superficial method of comparing potential mates, it is assumed that there is a reduced energy cost for the newts’ search efforts
● Other possibilities
○ Even in the blue-light experiment where the newts would not be able to make out the colors of bellies, the same results were obtained
○ This may be because females indicate their mating ‘readiness’ or their overall ability to produce viable offspring through other behavioral or chemical cues to be picked up by the males
● The researchers concluded that more research must be done on the impact of female choosiness and how the coloration differences in females affects their fitness in the wild.
○ It is possible that either red or yellow bellies may have a higher fitness than the other coloration, which would further support the hypothesis that the males are evaluating which are the most viable females via their belly color.
● With all the results considered, the most likely explanation for the findings would be that the male’s choosiness for females is most likely the result of several different behavioral and biological factors.
○ These factors are chosen for because they are assumed to be associated with a higher fitness