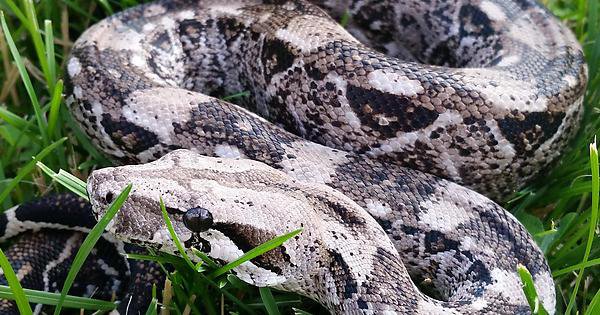 I wanted to learn more about the applications of phylogenetic analysis that we had discussed in class, especially in relation to the evolution of new species and populations of reptiles. So, I selected an article that interested me titled “Genomic Basis of Convergent Island Phenotypes in Boa Constrictors” published in GBE (Genome Biology and Evolution) in the fall of 2019. The team of researchers involved in this study explored the phylogenetic relationships of four Central American island Boa imperator populations, which all share the same island dwarfism phenotype characterized by reduced overall size and mass, lengthening of the tail, and narrowing of the face in comparison to the mainland populations. Specifically, they wanted to know if: 1) this phenotype originated independently in the island Boa populations, and 2) if any convergent molecular patterns could be identified for phenotypically relevant genes.

To answer the second question, they compared the divergent genome regions between the mainland populations and island populations and looked for regions of overlap in the island populations that had extreme allele frequency fluctuation from the mainland populations (0.9+) and that were also scored as deleterious mutations by the PROVEAN program, the goal of this was to isolate protein-coding genes that were being selected for by the similar island ecology. A program known as PROVEAN was used to identify phenotypically relevant protein-coding genes and genomic regions within this data set based on the evolutionary conservation of structure. In total there were 20 phenotypically relevant protein-coding genomic regions shared between the three populations of Boa imperator, these regions were then aligned with human orthologs in Uniprot and then used BLAST queries with various vertebrate species to determine the most likely protein products. This comparison was successful in determining the identity and protein products of four genes with nonsynonymous mutations (PTPRS, DMGDH, MYLIP, and ARSB) responsible for the island dwarfism phenotype observed in these populations. Two of these genes, PTPRS (protein tyrosine phosphatase, receptor type S) and DMGDH (dimethylglycine dehydrogenase) have critical regulatory roles in the Insulin-Like Growth Factor pathway, mutations and gene knockouts in vertebrate models lead to suppression of growth, and smaller body size and body weight. A third gene, MYLIP (myosin regulatory light chain interacting protein) is important for lipid metabolism and determining body mass, mutations in this gene lead to issues regarding fat storage and low body weight. Despite all three populations having mutations in these genes, they did not share the same mutations, meaning that each island had unique phenotype-altering alleles. To give an example, the West Cay population has a frameshift mutation at protein residue 222 on the PTPRS gene, whereas the Lagoon Cay population has an Alanine to Valine substitution at protein residue 434. On the contrary, all three populations display a pattern of molecular convergence with the same high frequency of a Glycine to Serine substitution on the ARSB gene (arylsulfatase B), which is functionally interconnected to the three other genes in regards to determining overall body mass and body size, and also plays critical roles the Wnt pathway used for the signaling of craniofacial development. Mutations to the ARSB gene in humans result in Maroteaux Lamy Syndrome, a condition that causes spinal and facial deformities, mutations to orthologous genes in dogs cause very similar disorders.

In summary, functionally impactful evolutionary changes were made to the same three genes in the island populations but with different allelic variants, and a convergent allele pattern was only identified for one phenotypically relevant protein-coding gene. The conclusion that is drawn from this is that natural selection and genetic drift by insular evolution are primarily responsible for driving a convergent dwarf phenotype in these three island populations of Central American Boa imperator.

It was very informative and interesting to read about how bioinformatics is applied, much of the material we have discussed in class held true in application. For example, homologous genes and proteins were critical in the creation of a phylogenetic tree that compared the multiple boa populations and were even more important in determining the function of genes identified in the boa genome. Similarly, in class, we emphasized the connection between protein structure and function, and here in this research article the reduced body size, facial alterations, and smaller mass that is seen in these island boa populations is a great example of how alterations to protein structure can drastically change how protein functions, but the fact that homologous proteins can be identified between evolutionarily distant species such as snakes and humans also shows how highly overall protein structure is conserved. However, there were several things that surprised me while reading the article, most notably the degree of uncertainty that exists at the end of the research process. When reading this information in a textbook or sitting through a lecture it seems like bioinformatics leads to straightforward answers and explanations, but there are so many unanswered questions at the end of the process due to a lack of resources, limitations to the conclusions that can be drawn from under-researched species, and general uncertainties.