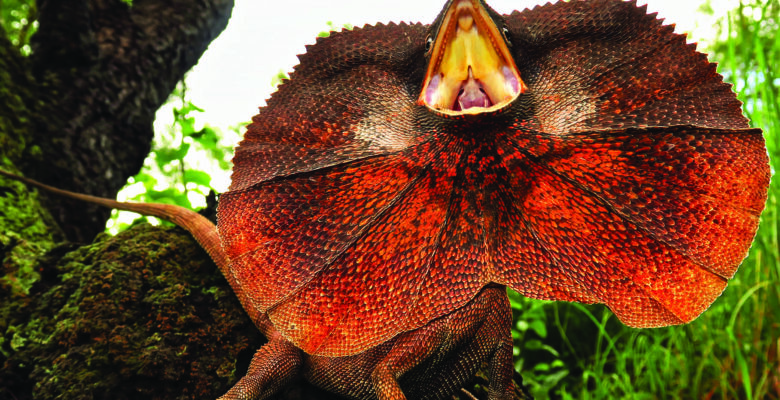 For this literature awareness challenge, I chose an article titled “Red Carotenoids and Associated Gene Expression Explain Colour Variation in Frillneck Lizards”. This study looked at the pigments and genes responsible for frill skin color in two populations of Frillneck Lizard.

So just to provide some context, Frillneck lizards are found in Australia, they are named for the flap of colored skin under their neck that is displayed to frighten predators, and which is also displayed in male-male competition for dominance and access to females. The western population display a red-colored patch on their frill and the eastern population displays a yellow-colored patch.

Color in lizards is determined in combination by two types of pigments: pteridines which have a genetic basis and are synthesized by the lizards, and carotenoids which they cannot produce and thus must be obtained indirectly through their diet. Many carotenoids also serve as precursors for biological processes, so allocating them towards ornamental coloration can be energetically expensive, but also an indicator of an individual’s health.

It is very unusual for lizards to have ketocarotenoid-based colors because this pigment is very rare or absent in plants, and the gene that encodes [ketolase] the enzyme responsible for converting other dietary carotenoids to ketocarotenoids is absent in most lizards.

They also found 117 genes that were differentially expressed in the skin of the two populations: genes related to carotenoid metabolism and pteridine synthesis were upregulated in the skin of the western population likely as a result of sexual selection for red frills, and genes related to steroid hormones were upregulated in the eastern population which suggests that yellow coloration is in part hormonally regulated.