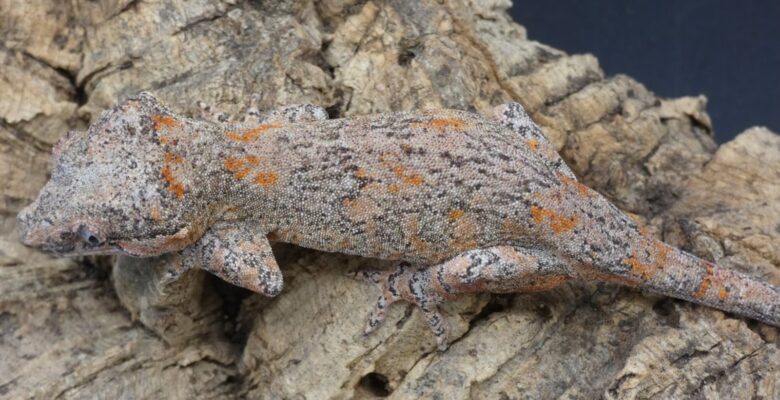 Meet the Gecko that Can Clone Itself

It's common knowledge that you need to have sex to make a baby, but what if women could create babies without the sex? This may seem like the plot for a science fiction movie, but somehow a gecko species has figured out a way to fertilize their own eggs without sperm. do exactly this. New research presented on November 7, 2021, by Ingrid Schoonover at American University titled “Capstone Presentation: An Overview of Reproduction and Development in Rhacodactylus auriculatus” has revealed a number of surprising details about the life cycle and behavior of the gargoyle gecko including the ability for females to reproduce without a male.

Gargoyle geckos (Rhacodactylus auriculatus) are large, colorful, and fruit-eating lizards from the pacific island of New Caledonia. They are one of over 100 reptile species that are “endemic” to this small mountainous island, a term which means that these species are found nowhere else in the world. Relative to its size, New Caledonia supports more endemic reptiles than anywhere else in the world, which makes conserving the species that live here a top priority. To put the value of New Caledonian diversity into perspective, consider that the much larger African island of Madagascar which supports 300 endemic reptile species is regarded as a global hotspot for biodiversity. So, at first glance it would appear that Madagascar is more important for reptile conservation because it supports three times as many species, but with an area of roughly 230,000 square miles it is actually 30 times larger than the 7,000 square mile area of New Caledonia. This means that land for land, New Caledonia supports over 10 times as many endemic reptiles as Madagascar does. What’s interesting about the lizards of New Caledonia is that they have evolved in the absence of mammals to become the most dominant animal in the ecosystem. So, if you were to walk around the forests of New Caledonia you would find that the trees are full of giant lizards instead of squirrels. Despite the rarity and significance of these lizards, up until now there has been no research done to learn about their reproduction and development.

In her presentation, Ingrid explained that typically gargoyle geckos form pairs and breed throughout the winter and spring and then go on to lay six sets of eggs. So, she was surprised when she found that one of her female gargoyle geckos laid a fertile egg despite it having been raised alone since it was a baby. It was even more of a shock when a baby gecko hatched from this egg 100 days later, making it the first documented case of asexual reproduction in its entire family. This phenomenon is termed parthenogenesis, which is a rare form of asexual reproduction where an embryo develops from an egg without being fertilized by sperm. This method of reproduction is so rare that it only occurs in 0.1% of all species. Furthermore, most species only have one method to reproduce: either sexually or asexually, but not both. So, for a species to have the capability of both is really fascinating and unusual in the animal kingdom.

More research will be needed to determine how this virgin gargoyle gecko was able to produce its own offspring without a mate, but one prediction is that this happens as a result of an egg fusing with its own polar body instead of with a sperm. If this is confirmed, then it would mean that the parthenogenetic offspring are half-clones of their mother. The next question that needs to be addressed is why and when does this happen? Ingrid suggested that for gargoyle geckos this might be a natural process that happens when females don’t have access to a male, which could happen as a result of natural disasters wiping out part of a local population or during migration to new habitats. Despite this observation, it's highly unlikely that asexual reproduction is common for gargoyle geckos, because sexual reproduction has the benefit of producing healthier offspring with more genetic diversity since they would inherit twice as many gene copies as their asexual counterparts. The developmental consequences of reduced genetic diversity have been observed in this asexual gargoyle gecko baby with it growing half as quickly as it’s sexually produced siblings. Other than its slower growth rate and being born with an eye deformity, the asexually produced baby gecko is developing correctly and is expected to live a normal life.